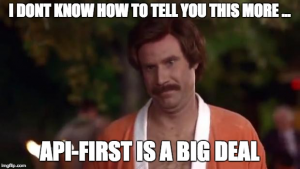 We have been applying API-First design principles for several years now and advise our customers to do the same. As the name suggests, API-First design means designing a system around an API rather than adding an API to an already designed system as an afterthought.

Note: when we say API, we mean a REST-API using JSON object representation – this is because virtually all APIs use REST these days, due to the fact that REST is based on http(s) which has emerged as the dominant communication protocol of the internet.

The main reasons for designing a system around an API are:

* Its canonical: the API is the canonical form of a system – i.e. stripping off details of presentation, storage etc, the API represents the system design in its most reduced, pure form. The API should remain valid even as you swap out client and server implementations.

* You can’t do without it: the fragmentation of client technologies (web, mobile etc.) means that we need to support multiple clients, making an API almost unavoidable.

* You’d better start with it: if you don’t make an API the starting point of your design, it’s going to be very hard to achieve a correct API without any bleeding of implementation details.

How to do API-First design?

The starting point of API-First design is that the API is authored and verified independently of any implementation. Crucially, this means creating the API with a set of specialised API design tools such as OpenAPI (which we use), NOT generating it from Java or Javascript classes. This lesson is often hard for developers to learn because they are used to thinking of an API as a way to invoke their code, rather than the other way around (namely that their code serves the API).

What this means in practice is that when your customers request an API, you must first design the correct API and then figure out what changes are required to the back-end code to serve that API. This is more difficult than it sounds – APIs follow standards with respect to statelessness, security, paging etc which may be very hard to serve with existing code. If you give into the temptation of asking your API users to live with the limitations of your back-end implementations, you will regret it – your customers will be unhappy from the start and you will likely have to live with those limitations for the lifetime of the system, even after you have swapped out the server implementation. Of course you can make v2 of your API, but you will still have to serve v1 because some customers will not be able or willing to upgrade their clients.

Connecting your API to your back-end systems

We have said in the previous section that you should not generate the API from the back-end system, but rather design it independently. So you may be wondering how the API gets connected to your back-end system. After you’ve designed your API (we use the OpenAPI Swagger editor to author the API), we use an “inflector” to wire-up the API to the back-end logic. OpenAPI provides inflectors for various languages, including our two preferred back-end languages, Java and Python. The inflector takes the API definition (OpenAPI uses a yaml or JSON definition) and takes care of invoking the back-end methods defined in the API definition. In practice this means that if you have existing back-end logic, you’ll usually need to modify it or create adapter classes to map between the API and the back-end. That’s the price of API-First, but its a price worth paying to achieve a usable and robust API.

Try not to reinvent any wheels. There are emerging, de facto, standards for designing REST APIs. Follow them. People will generally not thank you for designing new ways to handle naming, authentication, state or paging, for which there are already standards. Its tempting to think that your business case is unique and therefore deserves a unique API with its own standards, however, remember that customers will often have experience writing clients for multiple APIs and they will be grateful whenever you follow patterns that they already understand.

For example, a REST GET method which is named /messages will be expected to return a list of JSON Message objects. That should be the same Message object which is returned by GET /message/. There should not be an arbitrary MessageList class (this type of construct was a typical side-effect of generating an API from an existing language-specific implementation). the required paging metrics, such as the total items returned by a query, should be handled by out-of-band variables, such as an X-Total-Count header, thus leaving the contents as a simple object list.

However, these are only emerging standards and there’s no single definitive guide. The best way to learn them is by consuming (i.e. writing clients for) several well known REST APIs and by reading best-practice articles (see below for some links).

This site uses Akismet to reduce spam. Learn how your comment data is processed.